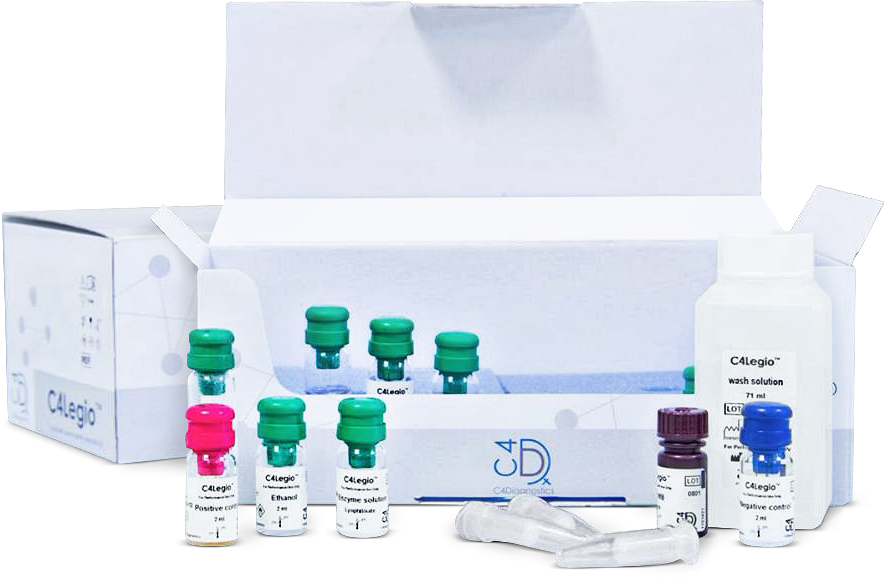 C4Legio™ kit provides all necessarily reagents to perform colorimetric detection of 15 serogroups of Legionella pneumophila (Lp). This kit also provide media optimized specifically for efficient Legionella culture. It uses human bronchoalveolar lavages (BAL) and is designed to provide qualitative colorimetric detection of the presence of Lp within samples. Unlike the urinary antigen test, it can detect all Lp serogroups and other Legionella species. The C4Legio™ kit can perform up to 13 tests per kit.

The C4Legio™ kit is intended for R&D USE ONLY.

Legionnaires’ disease (LD), caused by Legionella pneumophila (Lp), is a common cause of sporadic and epidemic community acquired pneumonia (CAP) and, albeit less frequently, of nosocomial infections. It affects both healthy and immunosuppressed individuals. Lp is estimated to account for 2–9 % of cases of CAP (1,2).
Legionnaires’ disease is characterised as an acute febrile respiratory illness with severity ranging from mild illness (Pontiac fever) to fatal pneumonia. It is difficult to differentiate from acute pneumonia caused by other microorganisms solely on clinical or radiological parameters, making biological testing an essential element of the diagnostic algorithm. Risk factors include age, immunosuppression, smoking, alcohol consumption, travelling and concomitant pulmonary disease. Mortality rate ranges from 8-12 % in most CAP cases to 15-34 % in nosocomial or severe CAP cases (3,4) and can be minimised by rapid diagnosis and early targeted antimicrobial therapy using either a fluoroquinolone or a macrolide (5).

The incidence of LD is estimated to be around 10/1 000 000 cases annually both in the US (2009) and in EU (2011)(1,5), with peak incidence in summer. However, the number of diagnosed patients is probably underreported, and the incidence has been increasing over time (4.5 fold between 2000 and 2017(6)). This increase is related to greater disease awareness and more systematic testing (ESGLI 2018).
Lp is one of the 30 Legionella species responsible for LD, and accounts for 90 % of reported cases of Legionella infection. Serogroups 1, 4, and 6 are the most frequent Lp serogroups. Classically, serogroup 1 is responsible for 50-80 % of LD, depending on geography and testing algorithm, leaving 20-50 % of cases caused by other serogroups(7). Serogroups 4 and 6 are more frequent in nosocomial infections.

• The urinary antigen test is the most widely used diagnostic method with a time-to-result of below 1 hour. The test is positive within 48-72 hours of symptom onset. However, it can only detect Lp serogroup 1, therefore a patient with a negative urinary antigen result could have LD caused by other Lp serogroups or other Legionella species. It should also be noted that approximatively 8 % of LD patients do not excrete antigens in their urine

• Culture and isolation of Lp from lower respiratory secretions (e.g. sputum, bronchoalveolar lavage), lung tissue, or pleural fluid is the reference method for LD diagnosis. It is confirmatory and required for epidemiological typing and infection control. Results are generally available within 3-5 days, although can take up to 2 weeks. Unlike the urinary antigen test, it can detect all Lp serogroups and other Legionella species. Legionella culture methods require specific culture media, but because of its confirmatory role it should be available in all laboratories testing respiratory samples.

Further information can be found at https://www.cdc.gov/legionella/clinicians/diagnostic-testing.html